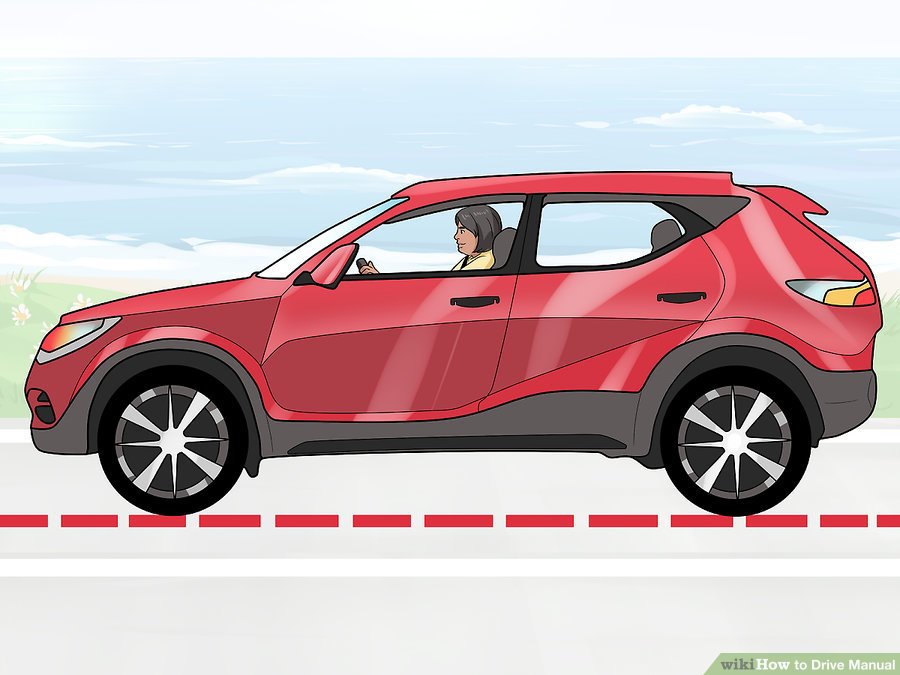 How to Drive Manual

The basic concepts of starting and shifting through the gears is a manageable process for just about anyone. To drive a manual, you'll need to familiarize yourself with the clutch, become comfortable with the gearstick, and practice starting, stopping, and shifting gears at various driving speeds. 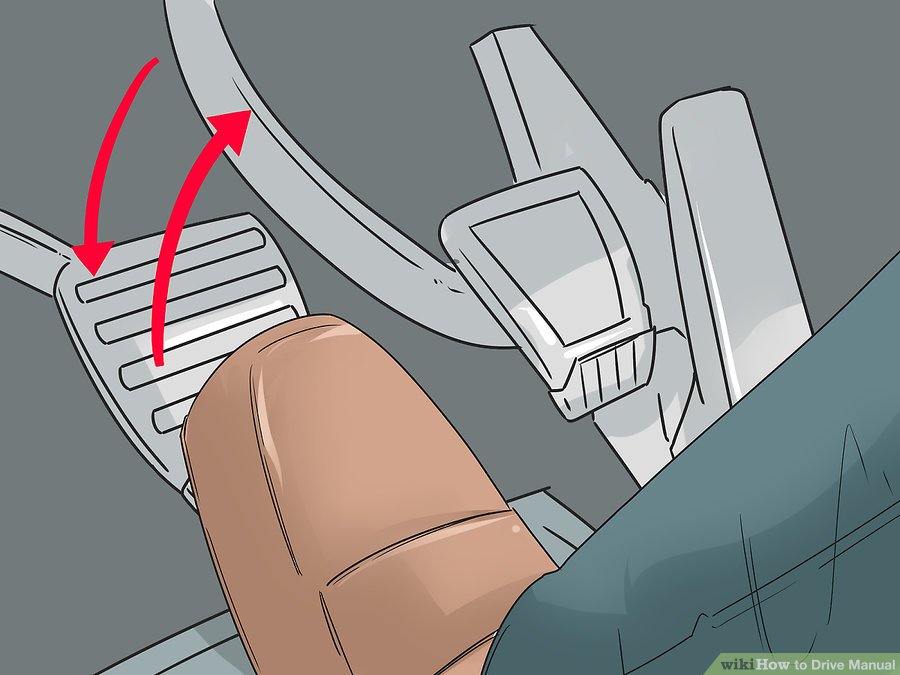 Start on level ground with the car off

Especially if this is your first time driving a car with a manual transmission, start slowly and methodically. Put your seat belt on once you sit down. While learning, it can be useful to roll down the windows. This helps you hear the sound of the engine revving and to shift gears accordingly.
The pedal on the left is the clutch, the middle one is the brake, and the accelerator is on the right (remember it, from left to right, as C-B-A). This layout is the same for both left-hand drive and right-hand drive vehicles. Learn what the clutch does

Before you start pushing down on this unfamiliar pedal on the left, take a moment to figure out the basics of its function.
The clutch disengages the engine from the wheels. When one or both are spinning, the clutch allows you to switch gears without grinding the teeth of each separate gear.
Before you change gears (either to move up or down), the clutch must be depressed (pushed).

Slide forward enough to allow you to press the clutch pedal (the left pedal, next to the brake pedal) fully to the floor with your left foot. Press the clutch pedal and hold it to the floor

This would also be a good time to take note of how the travel of the clutch pedal differs from that of the brake and gas. It’s also a good opportunity to get used to slowly and steadily releasing the clutch pedal.

Move the gearstick into neutral 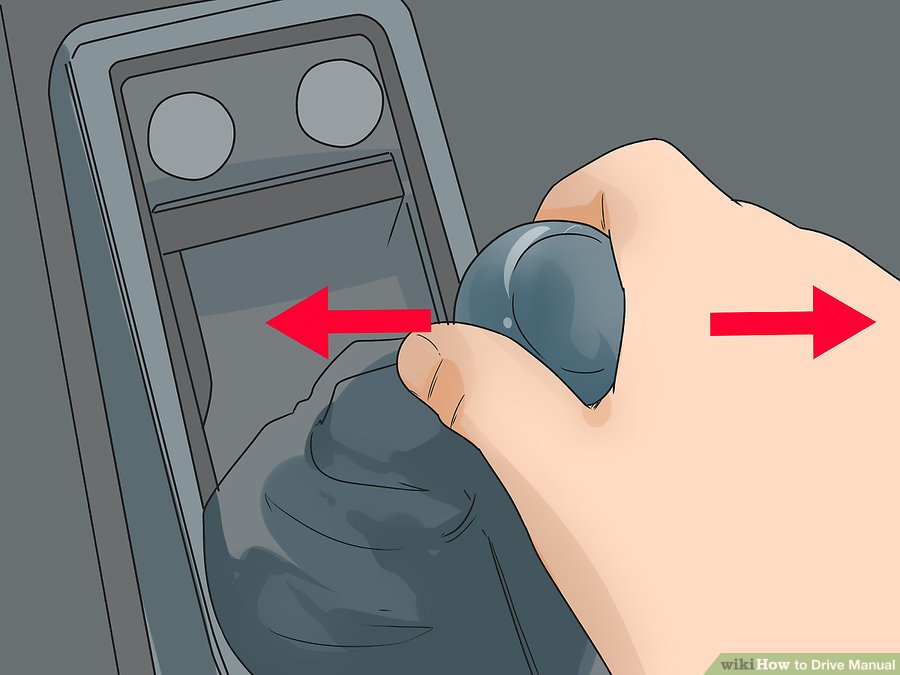 This is the middle position that feels free when moved from side to side. The vehicle is considered out of gear when:

Start the engine with the key in the ignition, making sure the gear stick is still in neutral 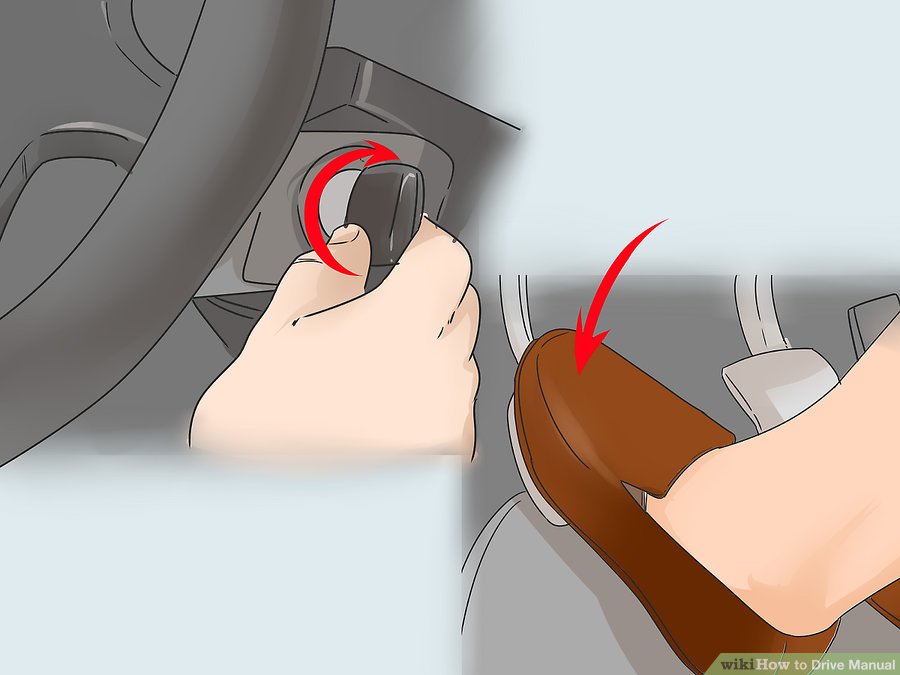 Make sure the handbrake is on before starting the car, especially if you are a novice. If you’re on level ground, you should remain stationary; you’ll start rolling if you’re on a hill. If you’re ready to move on to actually driving, make sure to release the handbrake (if it’s engaged) before you drive off. 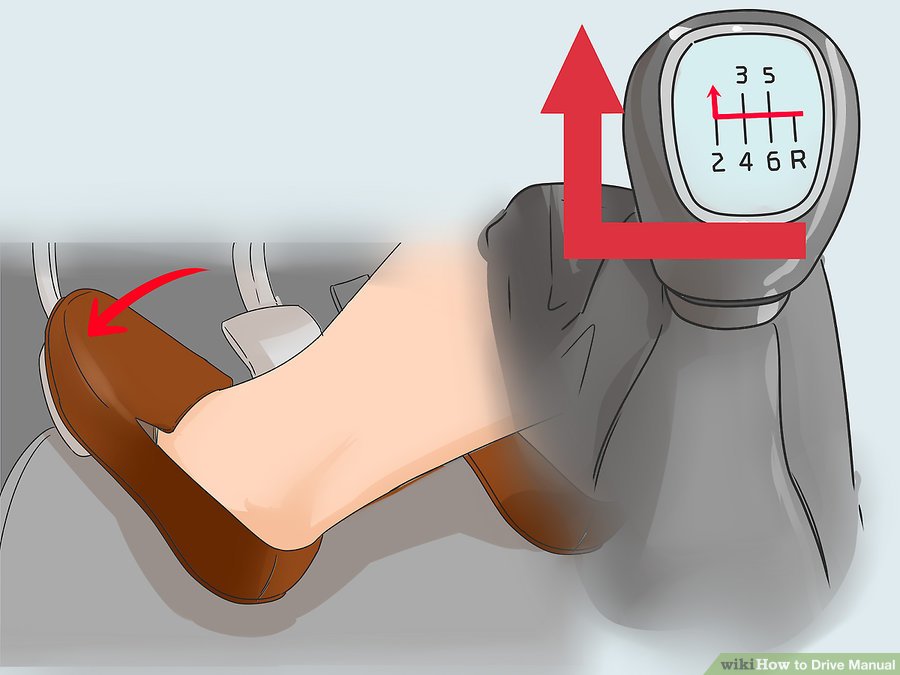 It should be the upper-left position, and there should be some kind of visual layout of the gear pattern on top of the gearstick.
Gear patterns can vary, so take some time beforehand to study your car’s gear layout. You may want to practice shifting through the various gears with the engine switched off (and the clutch engaged.

Slowly lift your foot up from the clutch pedal Continue until you hear the engine speed begin to drop, then push it back in. Repeat this several times until you can instantly recognize the sound. This is the friction point.[9]
When you’re shifting gears to start or keep moving, this is the point at which you’ll want to have the accelerator depressed enough to provide power.

Let up on the clutch while pushing down on the accelerator 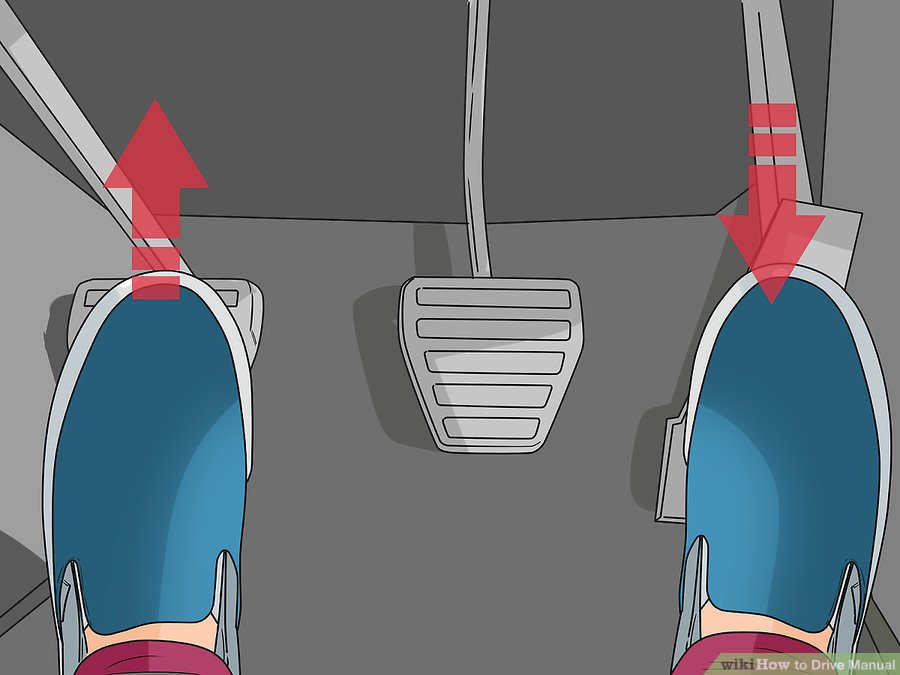 In order to get moving, lift your left foot up from the clutch pedal until the RPMs drop slightly. At the same instant, apply light pressure to the accelerator with your right foot. Balance the light downward pressure on the accelerator with slowly releasing pressure on the clutch pedal. You will probably have to do this several times to find the right combination of up and down pressure. 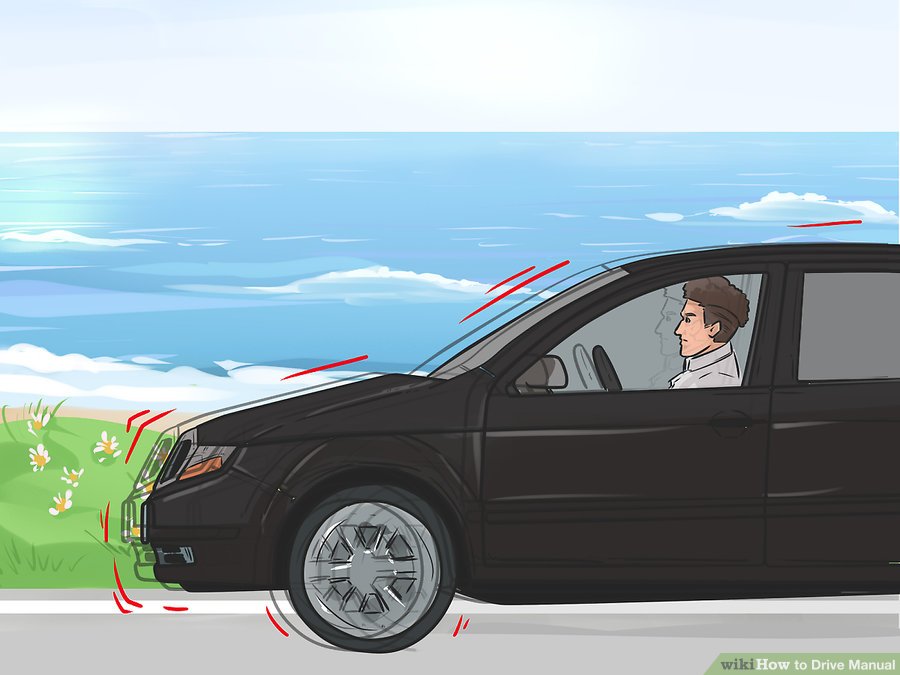 If you release the clutch too quickly the engine will stall. If the engine sounds like it is going to stall, hold the clutch where it is or push down a bit further. If you do stall, depress the clutch fully, apply the handbrake, put the car in neutral, switch the engine off and restart the car as normal. Don’t panic.

Shifting in Motion and Stopping When your RPM reaches about 2500 to 3000 while the car is in motion, it is time to shift to the next gear — for example, second gear if you are currently in first. The actual RPMs at which shifting is required will vary by the car you are driving, however. Your engine will begin to race and speed up, and you must learn to recognize this noise.

Shifting gears in motion is the same as shifting into first from a stationary position. It’s all about listening, looking, and feeling for the engine’s cues and getting the up-and-down timing of your feet on the pedals correct. Keep practicing and you’ll get the hang of it.

Shift down into a lower gear as you slow down Come to a complete stop To come to a stop in a fully controlled manner, shift down gradually until you reach first gear. When it’s time to come to a complete stop, move your right foot from the accelerator to the brake pedal and press down as much as is required. As you slow to about 10 mph (16 km/h), the car will be on the verge of shaking and vibrating. Press the clutch pedal fully down and move the gearstick into neutral to prevent stalling the car. Use the brake pedal to stop completely.
You can also stop while in any gear by depressing the clutch fully and using the brake while shifting into neutral. This should only be done when you need to stop quickly, though, as it puts you in less control of the vehicle.

Practice on an easy course with an experienced manual driver 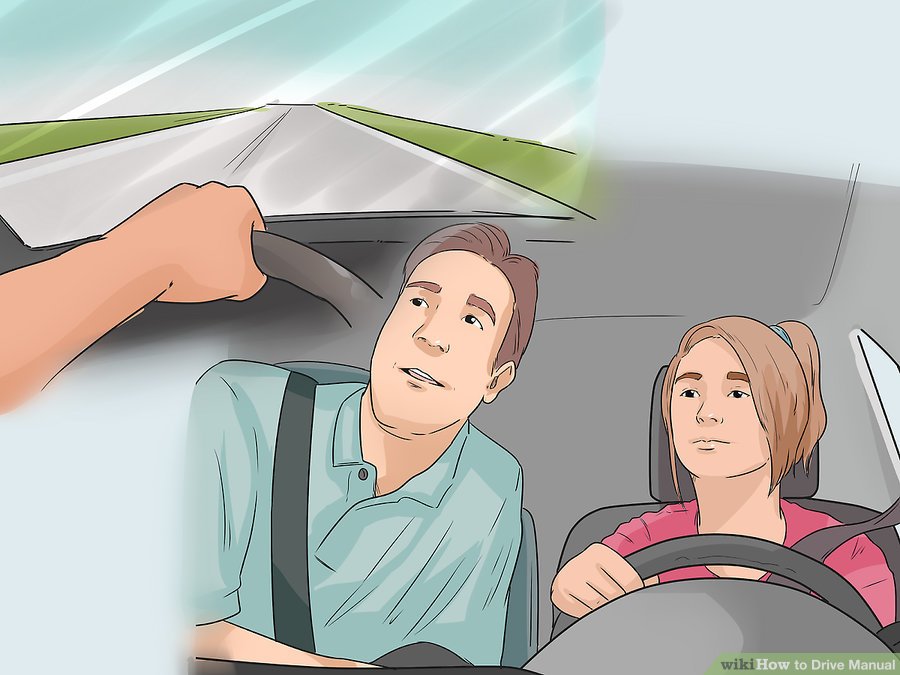 While you can legally practice alone on any public road with a valid driver’s license, you will pick up the nuances of driving a manual car faster if you have an experienced driver accompanying you. Start off in a flat, isolated area like a large (and empty) car park, then move on to quiet suburban streets. Drive around the same circuit repeatedly until you start to remember the various skills involved. When you’re new to driving a manual, plan routes that avoid traffic lights at the top of steep hills. Your timing and coordination in working the gear stick, clutch, brake, and accelerator needs to be fairly sharp in order to avoid drifting backwards when you shift into first gear.
You need to be able to quickly (but smoothly) move your right foot from releasing the brake to depressing the accelerator, while at the same time letting out the clutch. You can use the parking brake to limit backward drifting if necessary, but always remember to disengage it as you start moving forward. Unlike automatics, manual transmission cars don’t have a “park” gear. But, simply putting the car in neutral opens the possibility of your car rolling freely, especially if parked on an incline or decline. Always use the handbrake, but don’t rely on it alone to keep your car in place whilst parked.
If you are parked facing uphill, shut the car off in neutral, then shift into first gear and apply the parking brake. If facing downhill, do the same but shift into reverse. This will prevent the wheels from rolling in the direction of the slope.
On extreme inclines, or simply to be extra cautious, you can also place chocks (angled blocks) behind your wheels to prevent movement.

Stop completely before changing from forward to reverse (and vice versa) 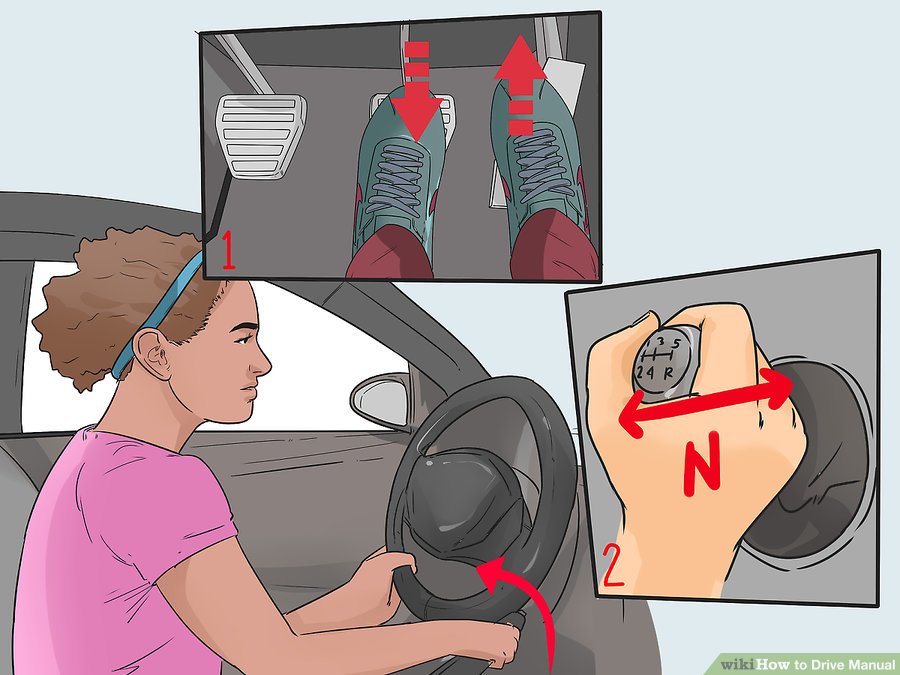 Making a complete stop when changing directions is an easy way to reduce your likelihood of causing expensive damage to your gearbox.